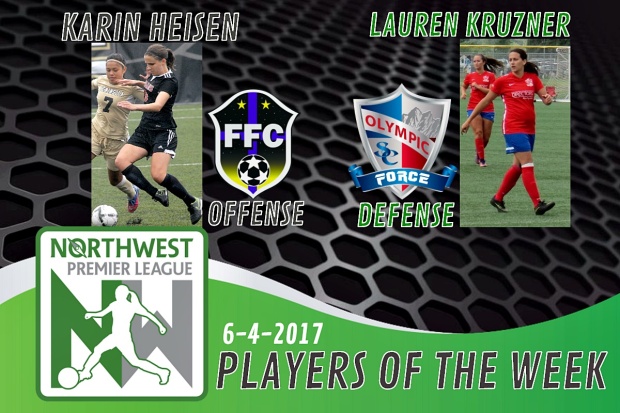 BREMERTON, WA— The Northwest Premier League today announces that Karin Heisen of Fuerza FC (Offense) and Lauren Kruzner of the Olympic Force (Defense) are the NWPL Players of the Week for June 4, 2017. 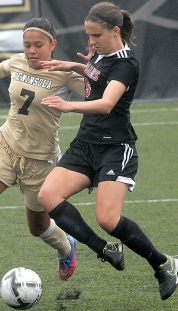 Karin Heisen scored a hat trick on Saturday June 3 against NCW Alliance at Goddard Stadium in Everett as Fuerza FC cruised to a 6-0 win. The next day in Wenatchee Heisen’s output was matched by Spokane’s Marissa Mykines, also against NCW. Heisen’s goals all came from the run of play while one of Mykines’ was a penalty kick.

Fuerza Head Coach Tony Carillo gives us a summary of Heisen, the soccer player. “Karin Heisen is from Mukilteo and a graduate of Kamiak High School and also played college soccer for Everett Community College. At 18 she is one of the many young players on the team. She speaks English and German and is also hoping to get a shot at playing in Europe for a pro team, so we are working on getting her over there when the NWPL season is over. Karin is very creative and knows how to position herself in the right places to score goals.” 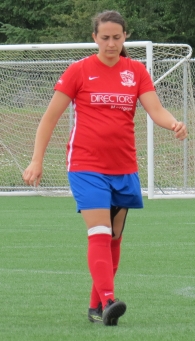 The Washington Timbers were throwing players forward all match last Saturday at Harmony Sports Complex in Vancouver. The final score against the Force that day was 0-0 and Olympic was giving much of the credit to defender Lauren Kruzner (South Kitsap High School, Olympic College.)

“The whole back line was under pressure the entire game but Lauren was the glue that held it together,” says Force Head Coach Jason Jarrett.  “She made critical tackles at critical times and helped keep everything organized to earn us a tough point on the road against a team above us in the standings.”

“Are you kidding?  She was amazing!,” says Force goalkeeper Ricci Wiedbrecht.  She saved my butt more than once and cleared a ball off the line.  I had kick saved a quick shot that rebounded straight in front of us and there was nobody there but their attacker.  She hit the shot and Lo had tracked back and cleared it off the line from about six feet away from me.  If she hadn’t been there we definitely lose that game.”

About the Northwest Premier League Players of the Week Honors

The Northwest Premier League will honor an offensive and defensive standout each week of the regular season. The league encourages nominees from head coaches. A panel of 3 NWPL staff members vote on the honors. The players who are honored receive a “NWPL Player of the Week” scarf.