OLYMPIA, WA— Blackhills FC Women are new to the Northwest Premier League (NWPL) but many of them are familiar with each other through the youth club whose name they share and also through local high school soccer.

Head Coach Kyle Jones will be trying to bring success to the first-year women’s program.

Great turnout for our 1st ever @BFCNWPL tryouts! ⚽️
Excited for the @NorthwestPL season ahead! Players not able to make tonight can still register here: https://t.co/QJWtuYIlNy pic.twitter.com/7SRqoZH6Jb

“Everything is new with our club this year as far as the NWPL team goes,” Jones says. “We are in the learning process of how the league works but moving forward as we had hoped. It’s exciting to be able to offer this opportunity to players in our community.”

Blackhills FC has some players who previously played for Twin City Union in the NWPL. Those players will be counted on to help the others get accustomed to the competition. “Our numbers continue to grow which is great to see, Jones says of his roster. “We have players from University of New Mexico, St. Martins, Evergreen, PLU, University of Portland and more. The 18 player game roster will be very competitive and that competition will carry over into training.”

Our first of many @BFCNWPL @NWPL game day rosters!

Blackhills FC Women are at home for their first-ever NWPL on Saturday May 5 against the Twin City Union, who come from Centralia / Chehalis just a few miles down I-5. Jones wants to win this season, and entertain. The he hopes the Olympia soccer world takes notice. “We hope to bring an attractive high energy style of soccer to the league. Community support is something that we are striving for and it will be our job to deliver.”

Ingersoll Stadium, 6:00 Donations only for admission 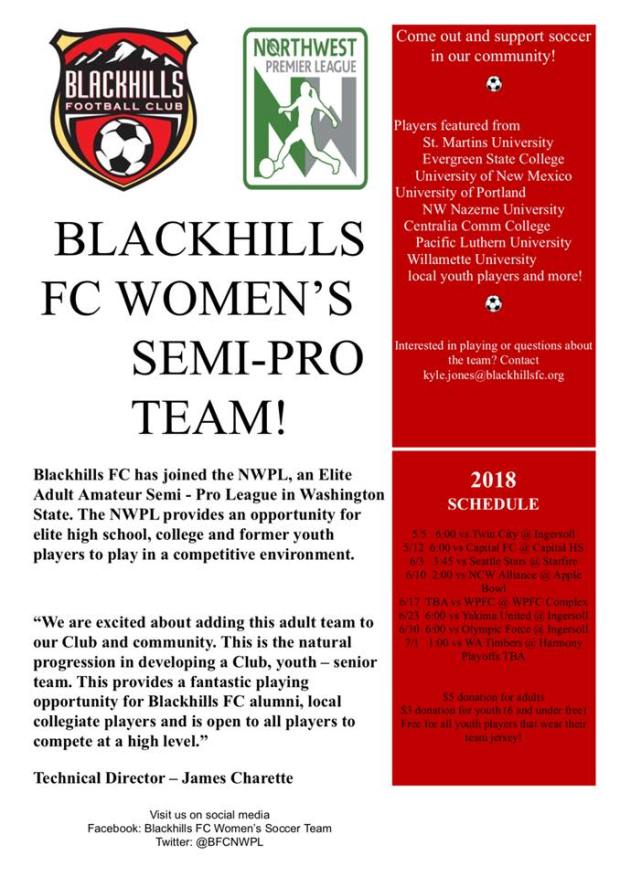