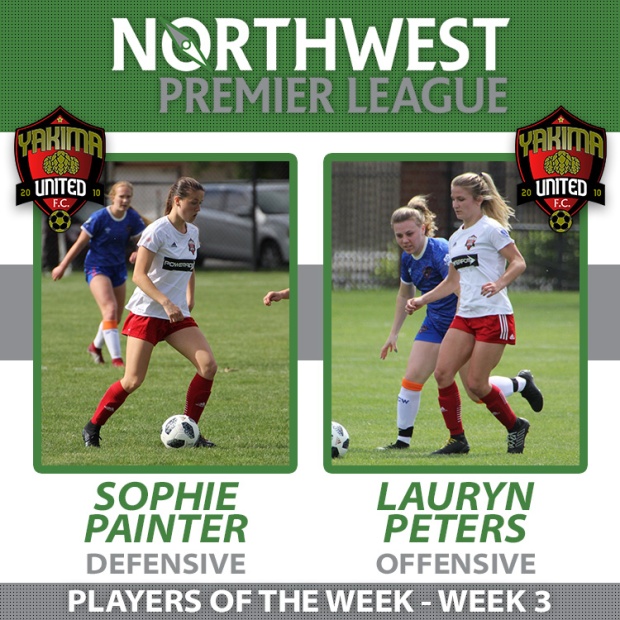 Yakima United is red hot over the last two weeks and their 7-0 win over NCW Alliance on Saturday led league coaches and operators to name two Hoppers as Northwest Premier League Players of the Week for week three.

Defensive: Sophie Painter has been the anchor for Yakima’s midfield early this season as their number 6 and played her best game of the season on Saturday according to coach Josh Vega. “She breaks down attacks before they get to our back line,” said Vega. “She is a true ball winner and turns those into attacks so brilliantly, even getting herself an assist this week.” The Lake Tapps native just wrapped up her freshman year at Yakima Valley College.

Offensive: With four goals on Saturday and two goals the previous week, Lauryn Peters continues to rack up the accomplishments in the NWPL. Against NCW Alliance, she collected those four goals and added an assist on Saturday in a 7-0 win. The previous week, she arrived back into town from Western Illinois University where she just finished her sophomore year at 2:00 AM and played later that day, scoring twice with one assist. The 2017 NWPL Player of the Year now has 19 career goals in the league and has won Player of the Week three times.

Week three featured four shutouts over five games and included a four goal, one assist effort from Yakima’s Lauryn Peters. Capital FC gave up their first goal – the only goal from a losing team this week – on a first half PK while Washington Premier still has not allowed a goal.

Vicky Cruz scored twice in the second half to lead Capital FC Atletica to a 2-1 win over the Washington Timbers in Vancouver on Saturday afternoon. Ellie Schmid opened the scoring in the first half with a PK and the Timbers held a 1-0 lead at halftime. Cruz then took over in the final 45 and goalkeeper Makenzie Pineda kept the Timbers off the board in the second half for the win. Capital FC moved to 3-0-0 this season.

Lauryn Peters exploded for four goals and added an assist to lead Yakima United to a resounding 7-0 win over the NCW Alliance in a Saturday contest at Yakima Valley College. Peters scored her first two goals within two minutes of each other in the 18th and 20th minute, accounting for the only two goals of the first half. Delaney Romero scored her first of two goals early in the second half and that opened the flood gates. Peters added another in the 64th, Romero scored her second in the 75th and then Peters scored her last in the 78th. Katie Fowler earned the shutout in goal for the Hoppers.

Mary Johnston scored in the 42nd minute to give the Seattle Stars a 1-0 halftime lead and Kellyn Green and Hannah Jenkins added second half goals in their 3-0 win over Blackhills FC in Olympia on Saturday night. Scout Watson played all 90 minutes in goal for the Stars to earn the shutout.

Nicole Williams scored the opening goal and the closing goal in Washington Premier’s 5-0 shutout of the Oly-Pen Force on Saturday at Gordon Field. Jackie Corley, Alyssa Andrews and Angela Celedon all added goals in the first half and goalkeeper Kyla Carter registered her second straight shutout and the team’s third shutout in three games.

Twin City Union traveled to Wenatchee on Sunday and left with a 2-0 shutout win over NCW Alliance. LeAnn Phanakone scored on a penalty kick in the 15th minute and Brook Swensen added another in the 19th minute to lead the Union to the road victory at the Apple Bowl. Emily Sorenson recorded the shutout for the Union. 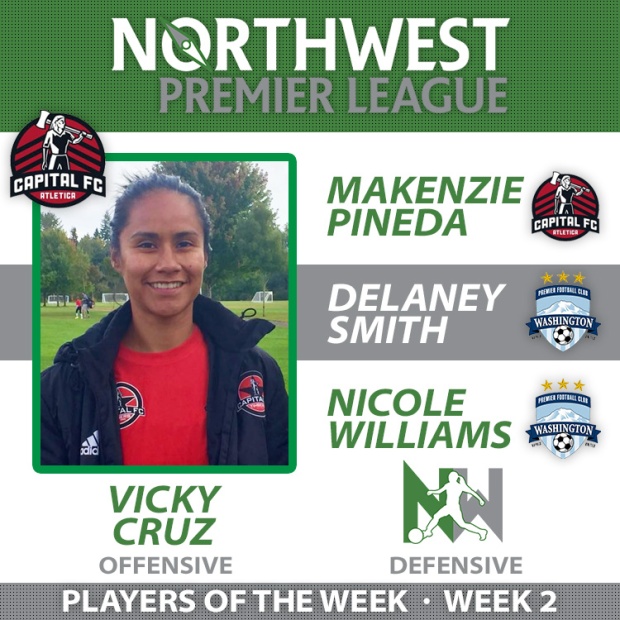 Capital FC Atletica and Washington Premier sit atop the Northwest Premier League standings and have not allowed a goal so far. The NWPL’s club coaches and operators have honored players from both teams with their week two Player Of the Week awards, and were split on the defensive player, so four players take home the award this week.

OFFENSIVE: Vicky Cruz scored a hat trick for Capital FC Atletica as they blitzed NCW Alliance in a 6-0 win at Sparks Field in Salem. The three goals matched her 2018 output with Capital, good for second on the team, as they try to replace the league’s Golden Boot winner, Laadi Issaka. Cruz is a graduate of McKay High School in Salem and continues her playing career with CFC after playing at Chemeketa CC and Western Oregon.

DEFENSIVE: Three players share the award in week two – Capital FC’s Makenzie Pineda and Washington Premier’s Delaney Smith and Nicole Williams, who were nominated as a pair by their coaching staff.

Pineda, a BYU-Hawaii alum is also a goalkeeping coach for the Capital FC along with her husband, has posted two shutouts in goal over the first two games of the season to lead CFC to first place and a seven goal differential after two games.

Smith and Williams have been equally strong in keeping two shutouts for Washington Premier. Head coach Adam Becker said that “both have recovered in 1v1 situations to block shots or run attackers down. And they have both showed very good patience in build up play.” Smith played collegiality at Evergreen State and won a title with the Seattle Stars last season while Williams is a Tacoma native who played at Western Washington.

Vicky Cruz scored three times and Makenzie Pineda kept a clean sheet in Capital FC’s 6-0 win over NCW Alliance on Saturday in Salem. Capital started it off in the 9th minute with Cruz’s first and added another from Julie Sattler in the 30th but NCW kept it within striking distance down by two at half. But Atletica was too much, pouring on four more goals in the final 45 minutes for their second win of the season.

Washington Premier and Yakima United battled to a scoreless first half at the Washington Premier Complex in Puyallup. But four minutes into the second half, Jamie Makupson gave WA Premier a 1-0 lead finishing a pass from Angela Celedon and then Cara Mayer added an insurance goal in the 74th minute and they kept a clean sheet for the second weekend in a row with the 2-1 win. Kyla Carter played all 90 minutes in net but was forced to make just one save in the shutout. Meanwhile, Brynlee Ward made 11 saves for Yakima United in the loss.

Playing in their home opener, Twin City Union jumped out to a 2-0 lead early in the game behind goals from Brook Swenson and Maddie Lockwood and held the lead until the 75th minute when an own goal cut their lead to just one at 2-1. Blackhills FC tied the game in the 89th minute on a goal by Jocelyn Charette and held on to a 2-2 draw to pick up a point in their season opener.

Yakima United started quickly on Sunday getting a goal from Kirsten Stickney in the first minute of play at Yakima Valley College. But she was matched in the ninth minute by Sarah Teubner, who tied it up for the Washington Timbers 1-1. Lauryn Peters broke the tie in the 22nd minute and then buried a penalty kick in the 41st minute to give Yakima the lead for good. Teubner scored her second in the 49th minute to get the score back to just one goal, but Natalie Nagle wrapped up the victory with a 76th minute goal that ensured a 4-2 win for United.

Alyssa Gray opened the scoring in the 29th minute to give Oly-Pen a 1-0 lead but Seattle’s Braeden Small tied the game at one goal apiece in the 37th minute and the two teams went to the locker room knotted up 1-1. Small scored the eventual game winner in the 69th minute and Hannah Jenkins made it 3-1 two minutes later and the defending NWPL champs opened up their title defense with a home victory at French Field in Kent. Scout Watson got the win in goal for the Stars. 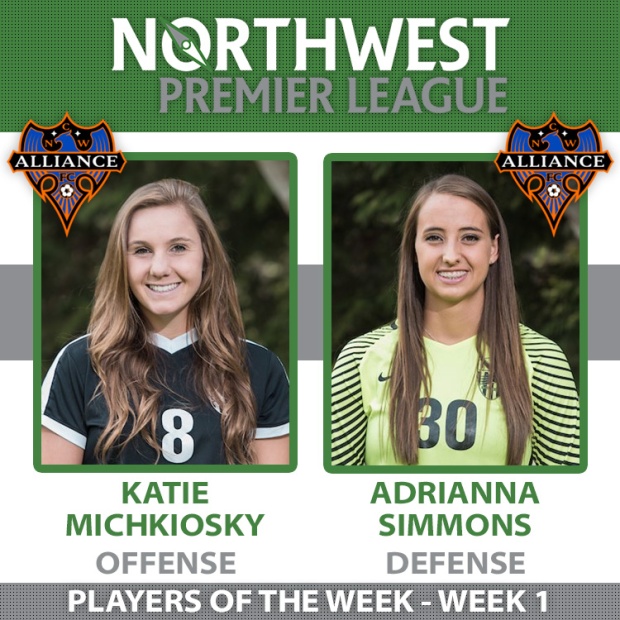 After going 0-8-0 in 2018, NCW Alliance opened up 2019 with a 3-1 win over the Washington Timbers, a semifinalist in last year’s playoffs. League head coaches and operators recognized two players from the Alliance with the week one Player of the Week award.

OFFENSIVE: The Alliance built a 3-0 lead thanks to Katie Michkiosky’s penalty kick early in the second half and then assisting on the third goal of the night late in the game and impressed her coaches with her poise, communication and dominating presence on the field. Michkiosky played her senior season at Northwest University this past fall and led the Cascade Conference with 20 goals and six assists leading the Eagles to the NAIA quarterfinals.

DEFENSIVE: Another Northwest University Eagle, Adrianna Simmons made several saves in goal for the Alliance and kept the Timbers off the board until very late in the game when they had already built a 3-0 lead. The Ephrata native impressed her coaches by providing the necessary information and commands that kept her backline connected and led them to their first win since July 9th, 2017. 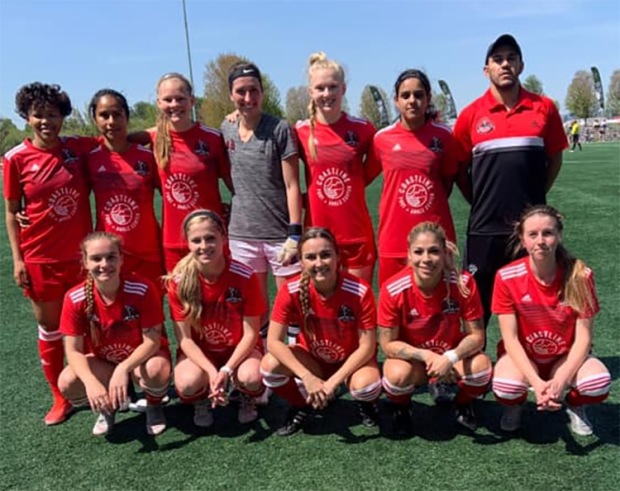 Namibia National Team member Annouscka Kordom scored in the 42nd minute off a pass by Julia Sattler to lead Capital FC Atletica to a 1-0 win over Yakima United on Saturday afternoon in Salem. Makenzie Pineda played all 90 minutes in goal and posted the clean sheet with one save to her name. Capital peppered Yakima with shots out-shooting the Hoppers 19-7 in the game. Brynlee Ward kept Yakima in it making eight saves while allowing just the one goal.

Jamie Makupson opened the scoring in the seventh minute on an assist by Angela Celedon, but despite not taking a single shot in the game while Washington Premier posted 17, Twin City Union kept it close until Celedon made it 2-0 in the 52nd minute. Julie Hass added a goal 30 minutes later and Keira Kersley posted a shutout without facing a shot on goal in the 3-0 win at the Washington Premier Complex on Saturday afternoon.

NCW Alliance, who went winless in 2018, built a three goal lead behind goals by Mady Smith, Katie Michkowsky and Carissa Miller en route to a 3-1 win over the Washington Timbers at the Apple Bowl in Wenatchee. The Timbers kept it close after a 16th minute goal by Smith made it 1-0 until the 56th minute when Michkowsky scored on a penalty kick. Ellie Schmid got the Timbers on the board in the 83rd minute but it was the lone goal Alliance keeper Adriana Simmons gave up in the win on Sunday afternoon in front of 268 fans. 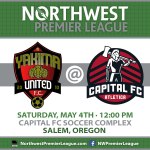 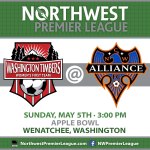 The Seattle Stars are the defending NWPL champions and have been busy adding a plethora of players to their roster and looked poised for a repeat. But the Washington Timbers will surely have something to say about it, along with many others. Four of the nine teams have new head coaches including the Timbers, who won the league in 2017 and were finalists last season. The league also features the same exact lineup as last year, with just two slight name changes for Capital FC Atletic and the Oly-Pen Force the only changes.