KENT, Wash. – Isabella Castro came off the bench to score two goals to lead the Seattle Stars to their second Northwest Premier League championship in as many seasons with a 4-0 win over Capital FC Atletica on Sunday afternoon at French Field. Stars goalkeeper Drew Moulton picked up the shutout and the Stars finished off a second straight unbeaten season with another trophy.

The game was delayed nearly 30 minutes due to travel issues for Capital FC, but out of the box, Atletica looked like the aggressor dominating possession for the first 15 minutes of play. But Seattle got their bearings and it was a former Capital FC forward Rita Okoro who put the Stars on top with a bullet from the top of the box in the 20th minute.

On a hot day with the temperature on the turf at French Field reaching nearly 100 degrees, the referee stopped play for a water break in the 25th minute. Almost immediately after play resumed, Isabella Castro unleashed a shot that looked to be heading wide of the goal that somehow spun on frame, barely caught the post and ricocheted into the net for the Stars second goal of the game. The University of Washington senior then scored her second goal just seven minutes later to give the Stars a 3-0 in the 35th minute. For her two goal performance, Castro was named the Finals Most Valuable Player.

Isabella Castro gets her MVP award

Capital FC goalkeeper Alyssa Flores, making her first start of the season, kept the game close with numerous big saves on shots that could have blown the game wide open at any time in the first half. With her keeping the lead to just three goals at the start of the second half, Capital again started off by dominating possession, generating a handful of opportunities against the vaunted Stars defense.

But without anything to show for it and frustration mounting, the Stars turned it on again and made Flores make another couple of outstanding saves before Morgan Castain drove one past her in the 72nd minute to cap off the scoring. Capital could not mount a late comeback and Seattle finished off the shutout to win the championship, 4-0. 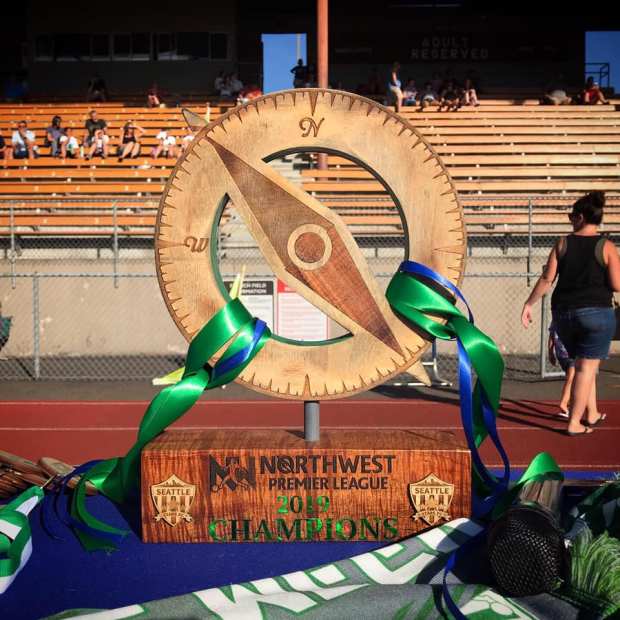 The new NWPL Championship trophy, by The Woodcraft Studio

Led by head coach Chris Wells, the Seattle Stars have now won 20 straight games since their 2017 championship game loss to the Washington Timbers and have allowed just six goals in the process. They have outscored their opponents by 61 goals during their two championship seasons.

Capital FC Atletica finished their season with eight regular season and playoff wins and just two losses, both of them coming to the Stars at French Field.