The Northwest Premier League held their Annual General Meeting on Tuesday afternoon at Well 80 Brewhouse in downtown Olympia and announced four awards for the 2019 season as voted on by league members: Golden Boot, Golden Gloves, Player of the Year, and Coach of the Year.

Player of the Year: Whitney Pitalo (Capital FC Atletica) – The founder, director and captain of the Capital FC Atletica program, Whitney Pitalo took on even more responsibility this season as a goal scorer. Needing to replace the firepower of Laadi Issaka, Pitalo stepped up and scored seven regular season goals, finishing in a tie for second place with Washington Premier’s Angela Celedon. But her versatility is what impressed coaches the most and earned her the NWPL’s 2019 Player of the Year playing all over the field and leading her team to a 7-1-0 regular season finish and a championship game appearance.

The South Salem High School alum and University of Southern California defender played wherever she was needed during the 2019 season. She earned an Offensive Player of the Week Award in week five with a two goal, one assist performance in a 4-1 win over the Oly-Pen Force. Her performance on the field was impressive, especially when combined with her leadership of the club, and of course, when asked about her Player of the Year Award, she extolled the virtues of her club and community rather than speak about herself.

“This year with an amazing World Cup we had a lot of extra attention to draw on, but I believe women’s soccer was already on the rise,” said Pitalo. “In our third year, we had many more supporters and volunteers. The World Cup felt like a celebration of where women’s soccer has come and where it’s going. I think that’s when I started to realize that it’s not just players who loves the game, but the community wants to be a part of it. It was a special year and I only see growth from here.”

Pitalo will take her experience building Capital FC Atletica to Roseburg this fall as their new Assistant Athletic Director and she will be involved in founding the new Umpqua Community College women’s soccer program. While she doesn’t rule out coming back and playing for CFC if her schedule permits, it is possible that she will bow out on top with the league’s top award. 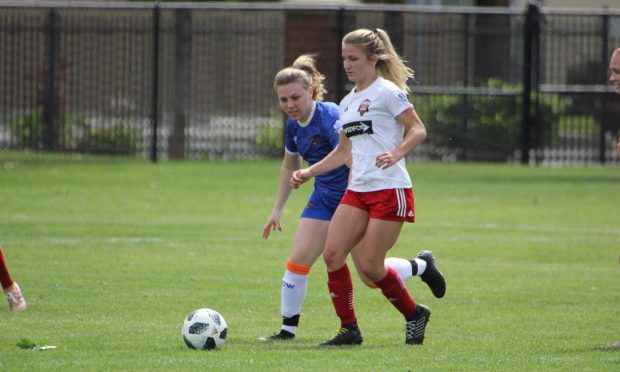 Golden Boot: Lauryn Peters (Yakima United) – 2017’s Golden Boot winner and Player of the Year, Lauryn Peters, did it again and ran away with the 2019 Golden Boot Award, scoring 12 goals in the six regular season games that she played in, leading the Hoppers to their best record as a club (5-3-0), their first home playoff game, and their first playoff win.

Peters, a Yakima native and West Valley High School product, returned home from college at Western Illinois early in the morning on Sunday, May 12th and made her first appearance for United just hours later contributing two goals including what proved to be the game winner in their 4-2 win over the Washington Timbers. A week later, Peters scored four times to earn Player of the Week for week three. She won the award again in week eight after a three goal weekend.

“Lauryn has proven herself to be one of the most dangerous forwards in the league,” said Yakima head coach Josh Vega. “And the truth is she’s so much than just a goal scorer. She’s one of the real leaders on our team.”

Her 12 goals in 2019 brings her grand total in Northwest Premier League action up to 26, where she comfortably has the record for most career goals. A junior at NCAA Division I Western Illinois, she has played every single minute of the Leathernecks first five games.

Pineda, an American Fork, Utah native and BYU-Hawaii alum that is also the goalkeeping coach for Capital FC Timbers youth program, held down the roll for the first five games of the season before a family vacation took her away from the team and other commitments made her unavailable for Sunday games. According to CFC Director and teammate Whitney Pitalo, she very much wanted to play in the playoffs but was not available because their playoff games were scheduled on Sundays. In just those five games, Pineda tied for the league lead in shutouts with Washington Premier’s Kyla Carter.

“Playing for your teammates, coaches, family, club, school, or community is much more FUN than playing for yourself,” said Pineda.

Yakima United finished the season with a 5-3-0 record and a fourth place regular season finish and hosted their first playoff game, knocking off the Twin City Union to advance to the semifinals. It has been a natural progression for Vega and the Hoppers. They finished 4-5-3 in the first season of the NWPL and then followed that up with two three win seasons despite seeing improvement every year.

This season, Vega’s squad put it all together despite the challenges that go with playing in Yakima. For example: Yakima Valley College’s Sophie Painter won the Defensive Player of the Week award in week three and promptly left the club once school ended to return home on the west side of the state. But Vega and United built the depth and the talent this season necessary to withstand losses and were able to back up Lauryn Peters’ outstanding offensive season with a solid defense that gave up just 13 goals, their least as a club in four seasons.

“I’m very honored to be awarded the Coach of the Year Award,” said Vega. “We had a great season, our best yet, so obviously people will recognize the progress we’ve built over our four seasons. I’m just really happy to be a part of this league and coaching this group of great women from all over our valley.”

Vega has a lot on his plate with United.  He has to juggle coaching the Yakima women with directing the whole Hoppers club with dealing with the registration for the NWPL and EPLWA in his role with the Washington State Adult Soccer Association.